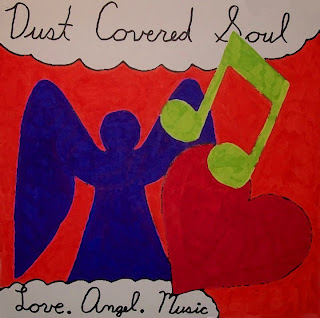 This is the final album art and title for the album I'm working on that WILL be done in the next hand full of months. I've recorded and re-recorded and re-envisioned a complete record that I'm going to press and distribute to the 5 or 6 interested parties for years now and I'm finally at a place creatively and I finally have the right view of the finish line along with the right songs to do this. I sound very pretentious right now but this has been a long time coming. I guess you could say I'm in the pre-production phase of things, getting the songs and the concept down at this point.

I've decided to go with the band name "Dust Covered Soul" that I came up with five years ago before deciding to just use my name because it won't be just me on this record. The album will have a song co-written and produced by Eric Quimby featuring his guest vocals and the other songs are going to feature my good friend and multi-instrumentalist Bryce Berry backing me up on a handful of instruments ranging from cello to piano to vocals.

The art is hand drawn and touched up in Photoshop. Over the years I have made literally dozens of potential album covers with several potential titles (My Legacy, Courting Disaster, Flannel & Folk Songs, Doing Just Fine to name a few) and I'm sick of using the same old filters and ideas over and over. I wanted to use a title and art work that came from a very real and organic place because that's where I feel like my songs come from. They have their flaws, because I have a lot of flaws musically, but I like to think that's part of my charm.

Posted by Travis Valentine at 10:09 PM