My Mom and Halloween

I've never been big into Halloween. I was a very bookish kid and I was definitely never the type of boy who liked snakes, snails, and puppy dog tails, so to speak. I didn't like getting messy, "Are You Afraid of the Dark?" gave me night terrors, and anything remotely related to horror made me nauseous (I'm not joking).

When Halloween season came around I took to the more light-hearted, cartoonish side to it. My mom was a certified genius when it came to costume making. One year I went as Johnny 5 from the movie "Short Circut" and she managed to pull this off. She made the large metal tread-like wheels for my legs from the lids to copy paper boxes and glued HUNDREDS of popsicle sticks to them for the "treads" one at a time. Having to buy a costume was like admitting defeat for her. I only ever remember wearing one store bought costume in my whole childhood and it was as a Power Ranger in the first grade.

Other things I went as include a gay space man (it was a character that I invented and she brought to life in and EXTREMELY flamboyant, bedazzled fashion), Superman (which she bought a Superman costume JUST to cut the emblem off of it so she could put it on her home made outfit made of sweat clothes and quality fabrics so I wouldn't have to wear a coat over my costume, per my request), Ash Ketchum from Pokemon (this was rather boring for her but she made my brother Picachu) and finally a computer. Yes, an entire computer. 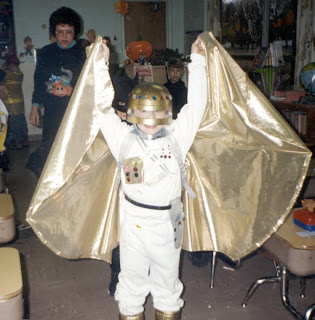 
Dowl rods in the spangly gold cape to make it extend like wings when I lifted it, a modified and bedazzled Robo-Cop helmet, and (you can't really tell from the photo) gold, bedazzled boots.

Then there was the computer. The mother of all Halloween costumes to ever be created. I went to my mother and told her that I wanted to be a computer for Halloween and without questions she created this.

That is a REAL mouse Velcroed to the side of the apparatus and a REAL keyboard sticking out of the front. This all would probably have been fine but she did not stop there. What you can't really tell from this photo is that those colorful "CPU" lights in the front have actual, working lights in them. My mother started by buying a set of battery powered, decorative Halloween lights from the dollar store. It was a short string of Christmas-style lights with small plastic pumpkins over the bulbs, attached to a small battery pack. I suppose it was probably designed to put on an office desk or in a window. Mom pulled the pumpkins off of each bulb and fastened the string inside the large box behind colored cellophane. She taped the battery pack with the switch on it inside the box by the bottom where I could turn it on and off with my hand. In short, she wired it so that my chest actually lit up while I was trick-or-treating.

The point of these anecdotes is this: my mom worked full time, every day. She's damn good at her job and has done it for a lot of years. Her work didn't always stop the second her key hit the door either, she spent a lot of nights working from home after a day of working in the office. She never stopped being incredible at her job but that NEVER stopped her from being an amazing mom.

My mom never missed a sporting event I was in, she led my den in cub scouts, we went camping and on family vacations, I never wanted for a single thing in my whole life, and believe me, I wasn't always the greatest kid in the world. I was sick as a kid, and it made me a wholly terror a lot of the time.

There are a lot of stay at home moms and even certain organizations who think that if a woman works, she can't be a real parent to her children. To those people I have to say, quite frankly... suck it.

THIS BLOG IS DEDICATED TO TRACY VALENTINE
Posted by Travis Valentine at 7:09 AM

Awesome! Travis I am a Lammytowner, aka fat guy, and I love this blog post!

I remember all my homemade costumes, I don't think I ever wore store bought either!! A gay spaceman is a brilliant idea by the way.

But go Loren! I am way to whiney and weak of mind to try to work with this little one. Mostly I am lazy, so three cheers for supermoms!

I love it! Working moms are amazing, as a SAHM I don't know how they do it.

Side note - I went one year as the headless horsemen. And my dad managed to make that happen.